Information about Bolivia:
Bolivia is a country that has much tourism potential and that contains a variety of touristic attractions due to its diverse culture, geographic regions, rich history, and gastronomy. Read more! Read more!

OTHER TOURS IN LA PAZ

ORURO, BOLIVIA: THE CAPITAL OF FOLKLORE

MYSTICAL TOURISM IN BOLIVIA AND PERU

DAY 01.- ARRIVAL TO LA PAZ
AM/PM – Arrival to La Paz (approximate arrival) and reception from the airport or bus terminal to transfer you to your selected hotel (Please don’t hesitate in sending us the complete details of your arrival, as we need those details in order to provide for you the best service available; likewise, we will need to know the name of the hotel that you will be staying at.). Upon arrival, reception, and accommodation in the hotel, you will have the day free in order to become accustomed to the climate and the altitude.
HOTEL IN LA PAZ: Provides a hotel room with private bathroom + breakfast.
Included: Transfer in + hotel.

DAY 02.- TOUR TO TIWANAKU (PRE-INKA CULTURE)
08:00-08:45 AM – Personal pickup from your hotel in the center of La Paz to start the trip to Tiwanaku via an asphalted highway; Tiwanaku is found 71 kilometers outside of the city of La Paz.
10:15-10:30 AM – Arrival to Tiwanaku (approximate arrival), with a visit to the Lithic and Ceramic museums which house around 3,500 recovered archaeological artifacts, ceramic tools, and diverse stone, metal, bone, and leather pieces (monoliths, contrails, etc.) – as well as textiles; afterwards, we will visit the main archaeological site of Tiwanaku along with its principal ceremonial centers – like: the Pyramid of Akapana – which is devoted to the various religious cults and also to astronomy; the Semi-Subterranean Temple – a quadrangular construction site which contains sculptures in its walls that resemble the faces of various people from diverse ethnicities; the Templo de Kalasasaya (Temple of the Standing Stones in English) – which is the biggest temple of all of the religious centers; the Puerta del Sol (Passage to the Sun) – the most relevant cultural work in which can be seen the image of “Dios Sol” (Lord of the Staffs) and in which in its perimeter can be seen 48 figures which resemble winged creatures and kneeling men; and, Pumapunku. Pumapunku is outstandingly known for its perfect usage of lithic material to create immense sculptured blocks of stone. The visit to the rest of the archeological sites is approximately 2.5 hours; afterwards, we will get to enjoy a lunch that is typical to Tiwanaku, and then we will return to La Paz.
16:30 PM – Arrival to La Paz (approximate arrival).
HOTEL IN LA PAZ: Provides a hotel room with private bathroom + breakfast.
Included: Tour to Tiwanaku (private transport, tour guide, entrance fee, lunch) + hotel.

DAY 03.- TRANSPORT FROM LA PAZ – COPACABANA + PM VISIT TO COPACABANA (LAKE TITICACA)
07:00-07:45 AM – Personal pickup from your hotel in the center of La Paz to start the trip to the peninsula of Copacabana via an asphalted highway; Copacabana is located 151 kilometers outside of the city of La Paz and the trip is approximately 3.5 hours long. The trip is taken along the border of Lake Titicaca with an impressionable view of the Andes mountain range.
MID-DAY – Arrival to Copacabana (approximate arrival) with accommodation in the selected hotel.
PM – We will have about a 2-hour visit to Copacabana; we will visit the Sanctuary of the Virgin of Copacabana, the local market – and, afterwards, we will ascend the stairs of the Calvario where we can appreciate the Yatriris, Amautas, Aymara people, and Quechua people who bless and invoke protection to every family. During the middle of the day, we will have lunch.
HOTEL IN COPACABANA: Provides a hotel room with private bathroom + breakfast.
Included: Shared touristic transport from La Paz – Copacabana, Visit to Copacabana, lunch + hotel.
NOTE: For all programs/services that involve Copacabana as a destination, it is important to make sure that you take with you your passport (which includes your entrance stamp into the country); there is a control post in the area where you may need to show this information.

DAY 04.- COPACABANA + ISLAND OF THE SUN + ISLAND OF THE MOON + RETURN TO LA PAZ
AM – After breakfast, we will start our tour to the Island of the Sun (Isla del Sol in Spanish), crossing the lake and arriving to the island approximately 1 hour later. Upon arrival, we will visit the archaeological sites of the religious center, Pilkokaina – the Temple of the Incas; afterwards, we will take a walk through the stairs of Yumani (created literally by the steps of our ancestors) until we reach the sacred Fountain of Youth (called Fuente de la Juventud in Spanish) where it is believed that a drink of sacred water from the fountain can purify one’s body and cause one to regain their youth; within the garden of this fountain, one can enjoy the Inka beauty which is found within.
After visiting the island, we will have lunch and then descend to the boat to continue to the Island of the Moon (Isla de la Luna in Spanish). In the northern region of the island, we will find the archaeological site of Iñac Uyu – the designated temple to the cults of the Moon; the temple is also recognized by the name Ajllawasi – or, “House of the Virgins of the Sun.” Afterwards, we will return to Copacabana and then take transportation from Copacabana – La Paz where we will then find accommodation in the selected hotel.
HOTEL IN LA PAZ: Provides a hotel room with private bathroom + breakfast.
Included: Tour to the Island of the Sun + Island of the Moon (shared boat, tour guide, entrance fees, lunch on the island), touristic transport from Copacabana – La Paz + hotel.

DAY 05.- FLIGHT FROM LA PAZ – UYUNI + TOUR TO THE UYUNI SALT FLATS + INCAHUASI ISLAND + OVERNIGHT STAY IN A SALT HOTEL
AM – Personal pickup from your hotel and transport to the La Paz airport.
AM – 1-Hour Flight from La Paz – Uyuni.
AM – Arrival to the Uyuni airport (approximate arrival) and transfer to our office in Uyuni where you will have free time until we start the expedition.
10:30 AM – We will get started (utilizing a 4x4 Jeep Land Cruiser) on our adventure where we will visit the following touristic attractions:

After visiting Incahuasi Island, we will have lunch and then continue to enjoy the dazzling white salt desert.
END OF THE AFTERNOON – We will have the opportunity to enjoy a spectacular natural lights show, performed by the setting of the sun when its colorful rays of light dance on the infinite sea of salt; after the magnificent show of lights, we will continue our trip to the villages of Tahua or Colchani to find accommodation in a salt hotel.
SALT HOTEL: Provides a hotel room with private bathroom + breakfast.
Included: Private transport (4x4 Jeep – Land Cruiser), entrance fees to the Uyuni Salt Flats, lunch and dinner + Salt Hotel.
Not Included in the Tour: Snacks; Drinks; Tips for Transport Drivers.
NOTE: Please take with you warm clothing, sun glasses, sun block, a camera to take pictures, gloves, warm hats, and towels; likewise, a rain coat during the months of December through March.
IMPORTANT: For the expedition to the Uyuni Salt Flats and also to the lagoons, there will be no tour guide due to the fact that the trip is landscapist and there is nothing to explain; the driver will give the necessary information in Spanish. If you would like a tour guide, you may ask us for one, and we will update the pricing as necessary.
INFO.: Please keep in mind that – due to changing weather climate and also conditions of the route to Uyuni (especially during the rainy season between December and March) – the order of these attractions will be subject to change without prior notice; however, all attractions will always be accessible – except for Incahuasi Island (possibly inaccessible only during the rainy season).

DAY 06.- TRANSFER FROM UYUNI – POTOSÍ + VISIT TO THE CURRENCY MUSEUM + TRANSFER TO SUCRE
AM – After breakfast, we will take private transportation to the city of Potosí; upon arrival, we will visit the Currency Museum:

DAY 07.- CITY TOUR + VISIT TO THE INDNIGENOUS COMMUNITY OF JATUM YAMPARA
AM – After breakfast, we will take a city tour in Sucre – known as the White City due to the preservation of the majority of its buildings; the entire city is a small taste of heaven because the buildings are covered in white:

After the visit through the city, you will have free time to eat lunch on your own account.
AFTERNOON – We will take private transportation towards the indigenous community of Jatum Yapara (the indigenous nucleus which rescues the values of the Yamparan culture – one of the most antique cultures of the continent) which is located 23 kilometers from the city of Sucre; we will visit the typical houses of the people that live within the community, as well as observe the vibrant colors of their dress, observing also their music and grand variety of textiles. Please note that – if you would like to acquire textiles and/or artisan pieces directly from the sellers – you will be able to do so upon our return to Sucre.
HOTEL IN SUCRE: Provides a hotel room with private bathroom + breakfast.
Included: City Tour in Sucre + Visit to the Indigenous Community of Yampara (private transport, tour guide, entrance fees) + hotel.

DAY 08.- FLIGHT FROM SUCRE – LA PAZ + CITY TOUR (CABLE CARS – "YELLOW – GREEN”)
AM – At the indicated hour, after breakfast in the hotel, you will be transported from your hotel to the Sucre airport.
AM – Approximately a 45-minute flight from Sucre – La Paz; upon arrival, you will be transferred to the selected hotel and then you will have free time until the start of the tour.
14:30 PM – City Tour in La Paz + Valley of the Moon + Cable Cars – "Yellow – Green:”
Personal pickup from your hotel in order to start the tour in La Paz (Note: Please be in the hotel lobby at least fifteen minutes early):

DAY 09.- TRANSFER OUT
AM/PM – At the indicated hour, we will personally pick you up from your hotel and then transport you to the La Paz airport.
Included: Transfer out à La Paz airport.
END OF SERVICES
NOTE: In order to provide tour and/or tour package prices, we would appreciate if you would please provide for us the number of people who would be going on the tour. 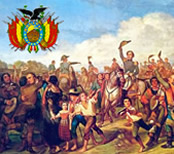 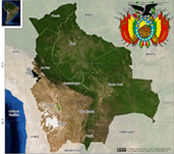 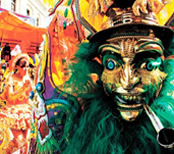 HOTELS AND HOSTELS: COPACABANA AND ISLAND OF THE SUN – BOLIVIA

HOTELS AND HOSTELS: UYUNI AND THE UYUNI SALT FLATS - BOLIVIA

OTHER SERVICES IN BOLIVIA 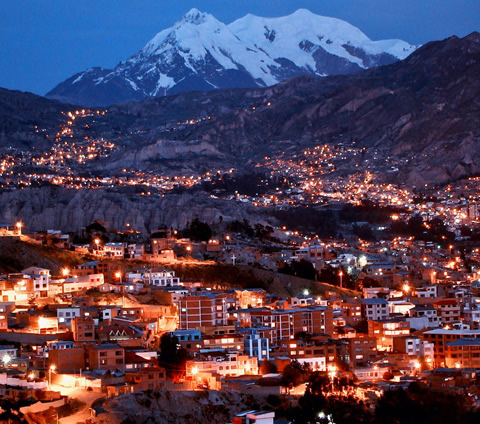 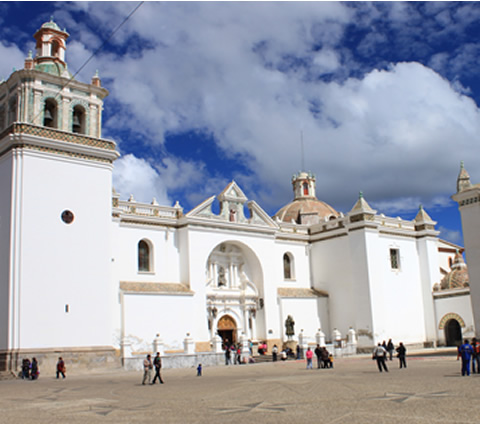 Program Name:
LA PAZ ENCANTADORA
Duration:  5 Days / 4 Nights
Places to visit:  the city of La Paz, Valley of the Moon, Tiwanaku, Copacabana, and the Island of the Sun (Lake Titicaca). 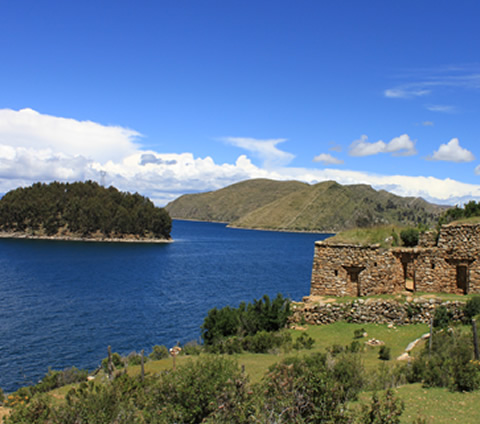 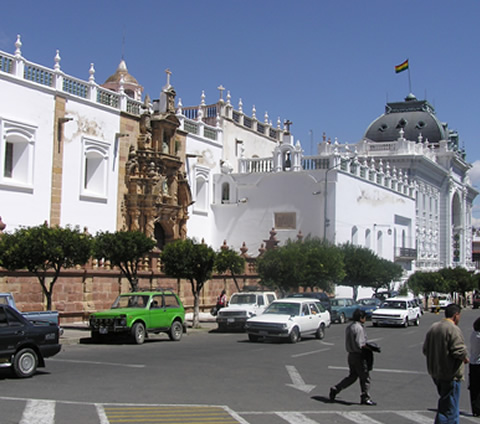 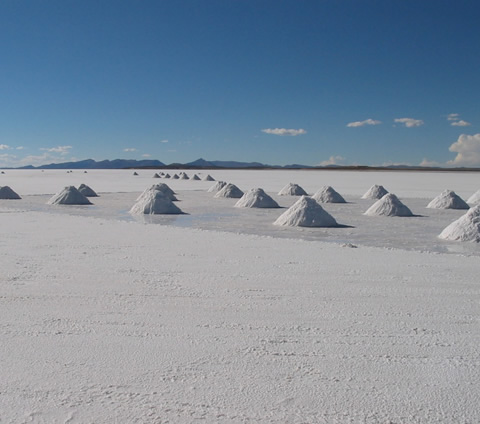 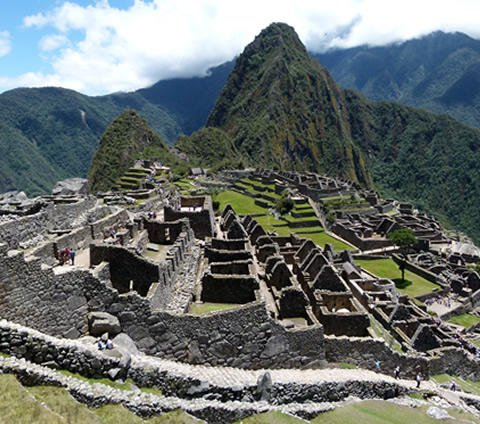 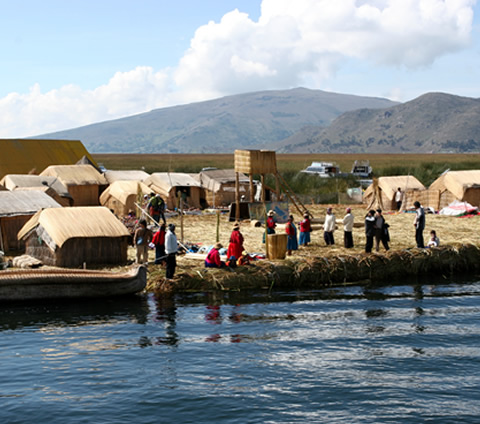 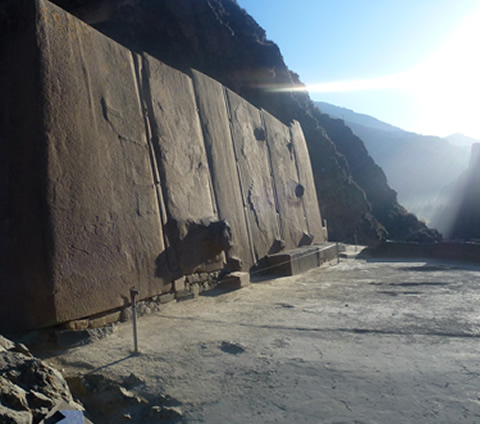 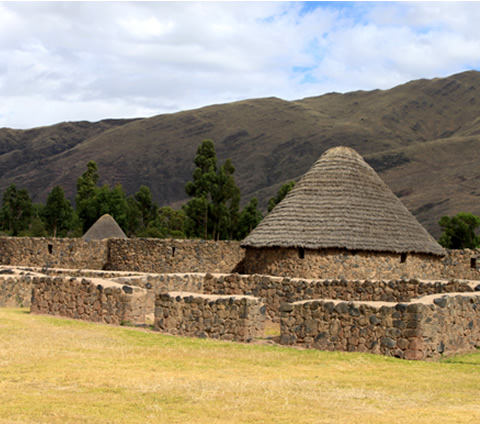 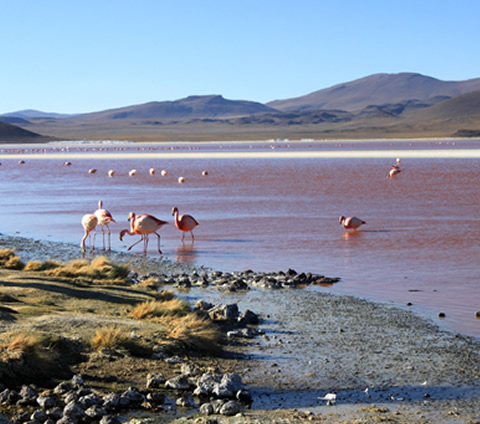 Program Name:
RUTA DEL WIRACOCHA
Duration:  11 Days / 10 Nights
Places to visit:  the city of La Paz, Tiwanaku, Copacabana, Island of the Sun, the city of Puno, Floating Islands of the Uros, the city of Cusco, Sacred Valley, and Machu Picchu. 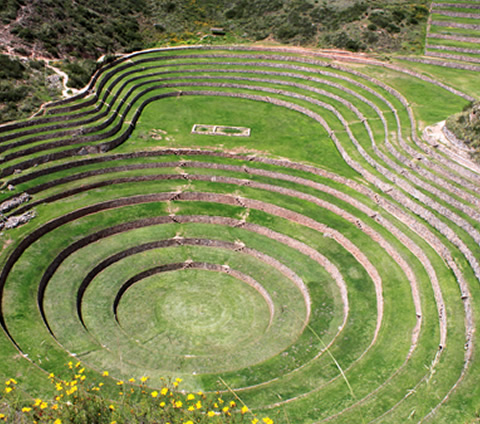 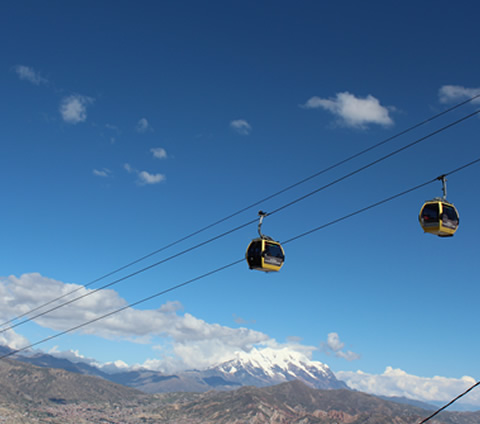 Program Name:
CAMINO DEL SOL
Duration:  13 Days / 12 Nights
Places to visit:  the city of La Paz, Tiwanaku, Copacabana, Island of the Sun, the city of Puno, Floating Islands of the Uros, Lake Titicaca, the city of Cusco, Sacred Valley, Machu Picchu, and the city of Lima. 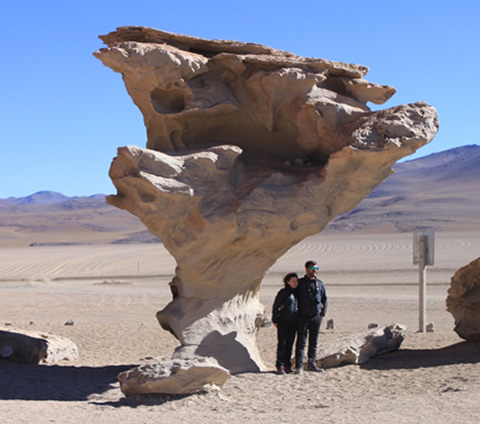 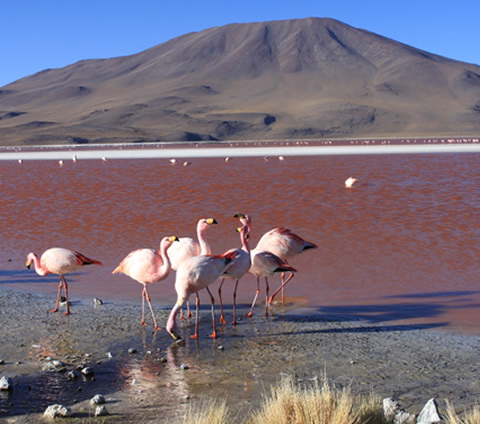 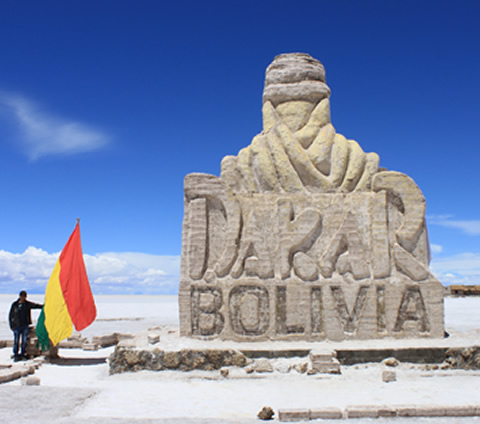 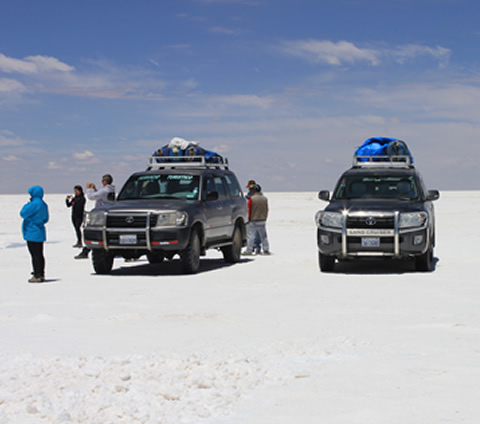